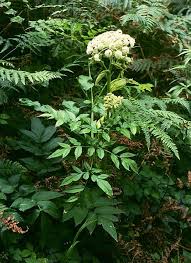 To the Editor of the Homoeopathic Recorder:

I have recently received an interesting letter from our colleague, Dr. Egas Moniz, of Bahia, Brazil, in which he speaks very highly of Angelica brava in the treatment of gastric fevers, hysteria and uterine troubles. He claims, and with much reason, that only by the processes employed by Homoeopathy can the pathogenesis of their valuable plant be properly established, and he has sent to us the roots of said plant so that the respectable house of Boericke & Tafel, of Philadelphia, may prepare the mother tincture, and invite, through the well known columns of the Recorder, those Followers of Hahnemann capable and enthusiastic enough to undertake its proving.

Angelica brava, like the European angelica, is of the umbellifera order, an aromatic, stomatic, carminative and tonic plant. The European variety comes chiefly from Lapland, and is known in France under the name of Racine de saint esprit, so-called from its supposed angelic virtues. Text-books give four more varieties where the properties are similar, though not identical with the Angelica of Europe. The Angelica lucida, or bellyache root, is aromatic and carminative, and has been employed by the Indians for colic. The Angelica atropurpurea (masterwort) is an indigenous species, growing over the whole United States, similar to the Angelica of Europe. The Angelica nendo or Ligusticum actaifolium, called white root by the natives, is also aromatic and carminative. And the Angelica sylvestris, or wild angelica, which possesses similar properties to the last, but in an inferior degree. The seeds of this plant, powdered and put into the hair are used to destroy lice, just as with Staphysagria.

But the indications given by Dr. Egas Moriz for Angelica Brava, lead me to think that the Brazilian plant is very similar, if not indentical, to Ligusticum Levisticum, a variety of umbelliferae, also called angelica levisticum. This plant, besides being stimulant and carminative, is an effectual emmenagogue. Some authorities claim that it does not only provoke and regulate the menstrual flow, but combats the systerical disorders attending difficult and painful menstruation.

The fact the angelica brava is endorsed by Dr. Egas Moriz, a pysician of Brazil, who has already introduced some valuable plants to the profession of France, is, I think, sufficient inducement to try a remedy credited with such useful properties. Many ignored plants could, by a little perseverance and sacrifice, take rank in the great arsenal of our materia medica, and this, I think, is one of them.

It may not be amiss to state that the Angelica of Europe, also cultivated in South America, is considered by Chernoviz not only a very strong stimulant, but a remedy recommended in slow digestion, chronic bronchitis, spasmodic vomiting, chlorosis, hysteria, as well as a reliable emmenagogue. Interesting is also to observe that the fruits of angelica enter into the composition of the cordial known under the name of Chartreuse, and that, with its stocks or shoots, a delicious sweetmeat is made. It is even a component part of the Balm of Comendador, and enters into the composition of the agua vulneraria espirituosa, both preparations emplouyed in the external cure of cuts and other wounds.