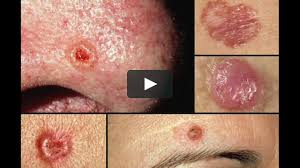 I respectfully submit to you two cases of cancer recently cured by me:

CASE 1. – Mrs. L.N.M., aet. 50, married thirty years, childless. Her father had suffered with cancer of face; brother had died with cancer on breast. She is a blonde, masculine built and very intelligent. She has suffered with irregular menstruation always; the only food she took for years was mush and milk. Constipation for fifteen years, yielding to nothing but enemas. her face was a red brown; from eyes to clavicles with dozens of elevated bluish spots, size of a bean and larger, most of them with a suppurating center, dozens of these had to be opened every morning. Five years ago she was under treatment of a physician, who applied an arsenious paste and it kept away for a few years; both alae nasi retracted one-fourth of an inch, the other ailments still remaining. I found her tongue heavily coated, a yellowish brown, severe nasal and bronchial catarrh, had uninterrupted cough for the last three winters, with heavy expectoration of a yellow-green color, kidneys sore, brick dust sediment, scanty urine. Began with chelid. 3x; after a month, general improvement. Taking the case again, decided on Hydr. 3x; marked improvement generally. Third month, Hep. Sul., 5x, Carb. a. 12x; in one month the ulceration had almost disappeared, appetite better, eats different foods, less constipated. Fourth month, suffered with general ulceration on roots of remaining teeth, Mer. Cor, 30x; had all teeth extracted, new plates fitted, is free of all trouble in that way. Sixth month, painful scanty menstruation, severe pain over left eye and under left scapua, Sepia 6. Seventh month. Ars. Alb. 12x; in two weeks, Aur. Mur. Natr. 3x trit. Eighth month, complained of hair falling out, general indications for Phos., gave 3x, in two weeks 30 Ninth month, conium 6x for remaining indurations on face, severe headache, gastralgia and general indications, Conium 30. two weeks later. Tenth month, Can. 30x. At present all and every complaint is overcome. She eats hearty, no catarrh. The face is free of all signs of former trouble (she uses massage for cicatrices), no constipation, no menstruation, no gasralgia, works for N. W. Life Ins. Co. As agent for the last three years and is as strong and happy as any young person could be. No external applications were used, except Calendula one to four parts distilled water when face was much inflamed.

She had an ulcer on left side of nose; said that she had an ointment given her by a physician two years ago that kept it clean. Four months ago she.came again. The ulcer increased in size, discharged profusely. Under left eyelid were several red elevated pimples, very painful and itching. Family history: father had died with cancer of throat, mother with cancer of womb, two sisters with cancer of womb. She was told by other physicians this was epithelioma. her face was covered with dozens of yellow blotches the size of a dime, which made me think of Phos., other symptoms corresponding, Gave Phos. 3x, in two weeks Phos.30. All pimples under eyelid had disappeared, discharge ceased. Took the case again, gave Ars. Alb. 12x during second month. Third month, Can. 12x; fourth month Con., and at the end of it, sil. 30. She is free of everything now, says she feels better than for years and works all the time. In this way I have cured up to fifty cases in thirty-two years, of all kinds. Only two deaths; an elderly lady of seventy years, with cancer of left mammae, died with pneumonia. The other had both breasts amputated (against my will), and died three weeks after in indescribable agony which all the morphine and chloroform given would not ease. I called it murder outright.

From my experience and success, I must denounce all and every effort to benefit or cure cancers with external treatment “a criminal farce!” Well directed homoeopathic treatment is the only way to cure. Have given this class of diseases closer study and care than most general practitioners. Guernsey’s article in his Obstetrics is the soundest. I have found yet, true to the dot. I am never without cancer patients and I cure. No coffee, whiskey, tobacco, pepper, spices, no other medicine can be used where I treat, or I quit. People say: Your treatment is slow but sure. I tell them I treat the Patient not the name, and when the patient is well there is no cancer. They say, yes that is so! Homoeopathy pure and simple ! Use this as you think best. Truly yours,

SUMMARY OF HEROIC PROVINGS OF GLONOINE 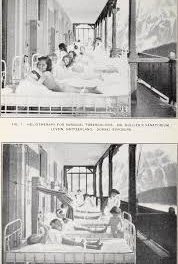 SOME POINTS IN HELIOTHERAPY