In an article with title “One Way to Study Materia Medica,” written for the International Hahnemannian Association last summer, I gave an outline of study of the Materia Medica according to a classification in chemical groups and in the natural orders of the animal and vegetable kingdoms. Therein I also tried to show the several advantages of this method of study and how neglected a one it is among the many by which we are to enter the vast domain of drug pathogenesis.

I take up the subject again in the study of that small group of drugs, the poppies or papaveraceae. I say small group, for although the genus numbers more than 160 species there are only a few that concern us. The most important members are:

We may dismiss, even, most of these in few words, turning our attention entirely to Opium, Sanguinaria and Chelidonium.

Argemone and Eschscholtzia, The Mexican and California poppy, as well as other varieties, are mildly soporific and are used in place of Opium in the countries where they grow. Argemone has emetic and purgative properties, besides narcotic, and has been used in diseases of the eye, for chancres, warts and cutaneous eruptions; also for colic with constipation, like Opium. As a local remedy it is largely used in Upper India for a toublesome eruption about the waist called Dhad. The word Argemone is from the Greek and signifies a white spot or ulcer on the cornea, indicating its medicinal use.

Corydalis Formosa is said to be diuretic and alternative, and has been used in syphilitic nodes, ulcers and gummata; syphilitic and non-syphilitic ulcers of the mouth and fauces; night pains, falling of the hair. Also in scrofula, skin diseases, enlargement of the liver and spleen from malaria, and in gastrio catarrh.

Fumaria officinalis was highly esteemed in ancient times and is still considerably used in Europe, being considered valuable in visceral obstructions, especially of the liver, and in scorbutic affections and skin diseases. The juice, when dropped in the eye, produces the sensation of smoke, fumus, hence the name; fumatory. The alkaloid, fumarine, is supposed to be identical with corydaline of Corydalis.

I mention in passing that the Lesser Celandine, flowering golden in the early English spring, and celebrated by Wordsworth in his poem “To the Small Celandine,” does not at all belong to this family. It is the Ranunculus Ficaria and a member of the Ranunculaceae. But here it is of interest to note that Clarke, in his Dictionary of Medicine, says the Ranunculaceae, as a family, are not far removed from the Papaveraceae. Gerarde, quoted by Clarke, says of the Lesser Celandine: “It groweth in meadows, by commonwaies, by ditches and trenches, and it is common everywhere in moist and dankish places. It come forth about the Calends of March, and flowereth a little after; It beginneth to fade away in April, it is quite gone in may, after wards it is hard to be found, yea, scarcely the root.”

What I have to say of Opium, Sanguinaria and Chelidonium will be largely comparative and in no sense a close study of these important drugs. If I dwell more upon Sanguinaria it may be because it is the least well understood of the three and very certainly on account of lack of space in one article to do justice to the other two.

In a language other than our own it is said of Chelidonium that it is purgative, diuretic, diaphoretic and expectorant; that it acts upon the liver and spleen, and is used externally in eczema, ringworm warts and corns; that it has gained some reputation in scrofula and phthisis. Of Sanguinaria it is said that it is an emetic, a purge, a diaphoretic, an expectorant, and emmenagogue; that is sedative in diseases of the heart, like Digitalis, and that externally it is used in cancerous growth. Of Opium many more things are said, but they are not of greater value and it would be idle to repeat them.

Fortunately such nomenclature is fast falling from us and with a sense of relief and expectancy we turn to our store-house of proving. In a general way the sphere of chelidonium covers the liver, the alimentary canal, the kidney, the lungs, the eyes the skin, the muscles and joints. That of Sanguinaria the mucous membranes, the vaso-motor system, the brain, the ears and nose, the liver, the skin, and in a lesser degree the muscles. Both Chelidonium and Sanguinaria produce nerualgias, and Sanguinaria has a narcotic action upon thee nervous system, but in neither do we find the overwhelming action upon the cerebrum as under Opium.

Sanguinaria antidotes the dynamic effects of Opium, and in some montal symptoms see how parallel the two run. I quote from Sang.

“Disgusting ideas. Sensations as if paralyzed and unable to move while lying on her back, with full consciousness of her surroundings. With open eyes, one dream chases another. It seems to her as if thee events that transpired in her dreams were not of hours’ but of weeks’ and months’ duration.” In Opium tie passes too quickly. “It seems to her as if all around her talked very rapidly, and that she is in a railroad car and begs others to hold her. Delirium with hot skin, mental torpor and sleepiness.” Sanguinaria also has hypersensitiveness to sounds and odors as in Opium.

Both Opium and chelidonium have great sleepiness without being able to sleep; both are aggravated during and after sleep.

Chelidonium, Sanguinaria and Opium have been used successfully in cancer, Chelidonium and Sanguinaria having the yellowness of the skin and other signs of the cancerous cachexia. Opium seems to have a truly specific action, as well as an analgesic one, in this disease, some cases of cancer having been cured by its use.

In polypi and new growths Sanguinaria and Chelidonium have won not a little reputation.

Old, indolent ulcers, especially if phagedenio, suggest Chelidonium. The ulcers of Sanguinaria are as indolent and have sharp-cut edges like Kali bichromicum. A Cure of ulcer of the leg by Opium is recorded, its choice having been suggested by pain! Essness and absence of all sensations, conditions so generally characteristic of this drug. This shows how superlatively indolent are the ulcers calling for Opium.

In jaundice-Chelidonium has yellow eyes and skin, dark yellow urine and light-colored stools, but so has Sanguinaria, and we must look to other symptoms to diagnose between these two Sanguinaria, too, may have the bright yellow stools so characteristc of chelidonium. Opium, Sanguinaria and chelidonium have stool in round, black balls.

Chelidonium and Sanguinaria have a liver cough, and Sanguinaria has a gastric cough as well. Both have cough with pain behind the sternum and both have stitching pains through the right side of the chest to the back. Iodine should be studied in cough arising from the liver, especially if the right lung is involved.

Sanguinaria and Chelidonium are right-sided remedies. Chelidonium has aversion to cheese; Sanguinaria, to butter.       Leaving now the blood relationship of these three drugs as members of the poppy family, I turn to a brief consideration of Sanguinaria on its own account. There is a good deal in the pathogenesis of Sanguinaria requiring stronger emphasis, and literature. History, however, abundantly shows that drugs, successfully used through the years by various schools, endorsed by native use and reputation, operate mostly according to homoeopathic law of cure, so that we may, at least tentatively, utilize much of this empiricism. That most of the poppies are deep acting remedies is evident from their wide repute in syphilis, scrofula, cancer various skin eruptions and chronic states generally. Almost all of them have a decidedly somnifacient action, Opium itself heading the list. In some this action seems due to a direct effect, through the vital force, upon the brain, while in other members their strong affinity for the liver will, perhaps in part, account for this condition of stupidity and sleepiness so characteristic of the family. Indolency runs plainly through the poppy family, typified in Opium, discernible in other members. This does not mean that these remedies are not called for in acute affections, for they often are, but even here if you look below the sufface you will often see indolence and chronicity at the bottom. This may not be discernible at first glance in the super-excited states of the nervous system or of the nerves of special sense, in the delirium, the vivid imaginings, the high-running fever or in other symptoms and conditions calling for these remedies. But with these poppies it is very much the same as it is in the false plethora of Ferrum. Beyond the apparent plethora of Ferrum we discover profound anaemia and beyond the epseudo-sthenia of the poppies asthenia looms in sight. Thee storms in the nerve centres are seen to be the forerunners of a bankrupt nervous system and everywhere erethism runs over into adynamia. Witness, for example, the overwrought literary man who cannot work, who cannot sleep, whose imagination is riotous, who sees grotesque or other figure or scraps of his literary work covering the wall of his room,- that man will suffer an utter collapse if something is not done. Give Opium and you have saved the day for your patient and yourself. In the indolence of old age; in states of insensibility and painlessness, where pain is looked for; in lack of reaction in acute and chronic conditions; in the corpulent and in general in all sluggish conditions, Opium or perhaps one of the other poppies will often be called for. We have seen how decidedly the liver and adjacent functions are affected by most of the poppies, and even in remedies like Corydalis and Fumatory there is a foreshadowing of what provings might reveal in this direction. The involvement of the skin is quite decided, and there have been cures of cancers, ulcers, polypi, warts, corns and many eruptions under these remedies. It is unfortunate there is so much vagueness as to the kinds of eruption they cause of cure, for Homoeopathy lacks definiteness in the skin manifestations of many of its drugs. We sometimes lose cases into other hands on account of insufficient knowledge here. The eye too, is affected in one way or another by many of these poppies, the climax of action being reached under Chelidonium. 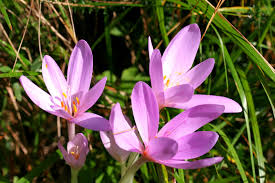 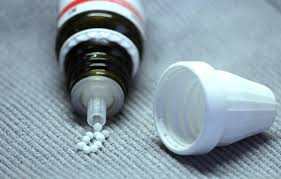