“Not every man nor even every physician is able to cure obesity. It requires study, and a good deal of it, if human lives should not be thereby endangered.”

These words of Dr. Schindler Barnay should be impressed on all those who take such treatments lightly and have no idea to what dangers they expose themselves by a rapid treatment according to the routine without individualization.

We must especially warn against the forced anti-fat treatments at Carlsbad and at marienbad; people might have been warned by the vertigo frequently showing itself after the use of the water at the Ferdinandsbrunnen, owing to its greater contents of salts and carbonic acid gas when compared with the milder some of these unfortunate patients is often so colossal that at any cost something energetic and effective has to be done. It may be interesting tow cite some attested examples from the work of Dr. Schindler Barnay quoted above (“Die Verfettungskrankheiten,” published by Moritz Perles, Vienna). In the year 1754, a Mr. Hopkins died. He had permitted himself to be exhibited on account of his great weight of 980 pounds.

Keisler mentions a fat Englishman, weighing 550 pounds, who was carried about in a sedan-chair by ten men in the sweat of their brow.

Wade tells of a man in New York who is said to have weighed 1,100 pounds in his thirty-second year.

Now, what is the cause of obesity

The right way of treating such cases is founded on these facts; the corpulent man must eat less than before, must especially avoid fat food – for fat makes fat – and also the so-called carbohydrates, such as potatoes, bread, cake, sweet things. On the other hand, lean meat, fish and fowl are permitted. Of vegetables there are permitted; Spinach, asparagus, salads; so also peas, lentils, beaus, groats, but not rice. Beer is absolutely forbidden, since the alcohol which it contains furthers the formation of fat. But a main factor of this therapy is motion. “Man not only digests with the stomach, but also with the legs.” Therefore, also long sleeping and the noon-nap is not suited for corpulent people. “Post coenum stabis, sue mille passus meabis.”  Motion quickens the combustion of fat.

We should take to heart the words of Paul Niemeyer. He compares man to a stove and according to the difference in the materials consumed the consumption of the same is of varying degree.

“The body consumes the more warmth (or oxidizes and consumes more), the more activity there is and the colder the external atmosphere; but he consumes less, the less he works and the warmer the air around him is. In the former case, therefore, more fuel may be put in, but in the latter case we must warn against over (h) eating. The combustible material which we consume in our daily bread consists of meat and of vegetable diet. Meat in general corresponds to coal us may also count pulse, potatoes, fat and sugar; and as anthracite coal we a my count: Pork, bacon and fat sausages.

Sedentary life (and the unwieldy corpulent, all belonging more or less to this class) can only bear a light diet, lean meat and little of it, light vegetables prepared with salt, and wheat bread.

A sedentary occupation allows only one chief meal and ought to be generally content with milk-white bread, butter, a moderate lunch and cold dishes in the evening.

A sedentary occupation does not agree with regular heating up with spirituous and alcoholic drinks. Smaller doses of the nobler spirituous liquors are allowable occasionally to introduce a more thorough combustion after burning fat pine wood.

Again, the lighter kinds of wine correspond to wood fires. Whiskey, beer and especially lager-beer and heavy wines correspond to coal fires. The same may be said of coffee, tea and chocolate in proportion as they are made strong and are taken with sugar.

To the proper care of the body may be added baths and in general the proper care of the skin, and Dr. Schindler Barnay sees in steam baths a strong weapon against obesity. Where there are disturbances in the circulatory system in consequence of the accumulation of fat, the stream of blood should be deprived of its water, according to the method introduced by Oertel and applied by his pupil, Schwinger, on Chancellor Bismarck, with the well-known success, i.e., the supply of fluids is diminished, the quantity of liquor is limited, while perspiration and transpiration are increased. Thereby the pressure in the circulatory system is diminished and the work of the heart is lightened. Dyspnoea is removed and the lungs work more easily. Systematic mountain-climbing, with increasing ability ever higher into the free and fair air of the mountains and the woods rich in ozone, is the aim of the sanitariums in higher localities, introduced by Oertel and which have become so popular.

As to the fatty degeneration of the heart specially, Oertel in his “Manual for the General Therapy of the Disturbances in the Circulation.” Lays down the following these: The muscle of the heart itself takes parts in the excessive laying up of fat, partly through the deposition around it of fat, and partly through the deposition of fat between the fibers, called by Kusch “the fattened heart.” Owing to this fat, the muscle of the heart is unable to act as formerly, it cannot push forward the mass of blood with the former vigor, and the less so if by too abundant supply of fluids, whether these consist of beer, wine, milk or water,a greater work is imposed. This causes a disturbance in the hydro-static equilibrium, the veins become surcharged, and the lungs are distended as the blood vessels there; thence arise bronchial catarrh, dyspnoea, heart failure and perspiration. It is not enough; therefore, that corpulent people should avoid food forming fat, but it is also necessary to limit the supply of liquids to the lowest measure. Furthermore. The excretion of fluids is to be induced by bodily exercise, especially by systematic climbing of mountains which also makes the muscle of the heart more able to work, and by Roman – Irish or steam baths. We are less inclined to enthuse over the injection of Pilocarpine which the author also recommends. 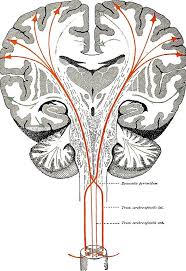 SOME ADVANCE STUDIES FOR MENINGITIS CEREBRO-SPINALIS